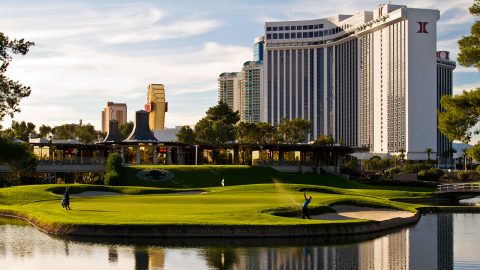 Las Vegas, Nev. (Sept. 30, 2016)–According to members, the final tally is in for the vote to sell the historic Las Vegas Country Club to a partnership made up of Discovery Land and Wolff Company and they have voted to sell. In May 2015, 72 percent of members voted to “explore a sale” and many potential buyers lined up for a chance to own the club that opened in 1967 as The Las Vegas International Country Club. Once the sale is complete, the club will cease to be member owned for the first time since 1970. –By Brian Hurlburt.

Yesterday, in my weekly golf notebook in the Las Vegas Review-Journal, I wrote in detail about the potential sale. Check out the entire article here.

At that time of the vote to the explore a sale, the CB Richard Ellis commercial real estate company was hired and more than 70 potential buyers signed confidentiality agreements with the company as the first step in the process.

The club was attractive to buyers because of the location, history, club rights to 850 acre feet of water and positive cash flow. Members were potentially looking to sell because of looming capital improvement assessments, and with an average age of 68, participation was waning.

This week, the long due diligence process comes to an end as another vote concludes Thursday evening. At stake this time is whether the members will approve a sale to a partnership made up of Discovery Land and the Wolff companies. Discovery and Wolff were deemed the best buyers in a recent member poll.

It is believed by sources close to the situation that the sale will be approved and the club will cease to be member-owned for the first time since 1970.

The Las Vegas Country Club has been the place to be and be seen over the years and counted politicians, mobsters, hotel magnates, celebrities, athletes, business leaders and other notables in Las Vegas as members. Now a new future is being charted for the club.

Discovery Land is also developing The Summit course and community in Summerlin in Las Vegas that is scheduled to open in early 2017. The new ownership group has guaranteed to preserve the history of the Las Vegas Country Club while adding enhancements and deeds mandate that the golf course must remain a golf course.