July 22, 2007–Las Vegas is known as one of the world's best places to spot celebrities, and catching a glimpse of them on some of the best Las Vegas golf courses, like Cascata (pictured), is nearly an every day occurrence. Within the past couple weeks, just a few of the names that have been spotted include Jason Kidd, Chris Webber, Kyle Korver, Clyde Drexler, Jason Terry, Corey Dillon, Tubby Smith, Lenny Wilkens, Charles Barkley and Michael Vick–yes, that Michael Vick–just before an indictment was handed down accusing him of animal cruelty, etc. Other celebrities who regularly tee it up on
Read More

June 20, 2007–Reggie Theus was pretty much an NBA player while he was starring at UNLV, and he was one of the keys to a UNLV team that averaged more than 100 points per game while on its way to the 1977 NCAA Final Four. He was showtime all the way with all-star looks, look-away passes, and behind-the-back dribbles. He went on to a long NBA career–he was twice named an All Star–and played for a season with Michael Jordan on the Chicago Bulls, before playing a few seasons for the then Kansas City Kings, and then one season for
Read More

June 6, 2007–Golf legend Lee Trevino will be in the Fox television booth talking and covering the Ultimate Game at Wynn Las Vegas, and will watch with the other millions on television booth while one of 12 golfers–including three with strong Las Vegas ties–collects the biggest winner's check in all of golf. $2 million will go to the champion, and along with Trevino, longtime Las Vegas pro golfer Jim Colbert (he used to own and operate Sunrise Country Club and Las Vegas Golf Club) will be close to the action as he will serve as an on-course reporter during the event.
Read More

June 7, 2007–A concert review and story on a golf website that is solely dedicated to Las Vegas golf? Well, when the front man for one of the world's biggest bands happens to be the cousin of a Las Vegas PGA Tour pro, Craig Barlow, and that front man is a golfer who played on his Las Vegas golf high school golf team, it's totaly appropriate for some entertainment news to enter the pages of GolfLasVegasNow.com. Brandon Flowers is a Las Vegas native, and he and his fellow The Killers rocked the Hard Rock Las Vegas Summer outdoor Stage last weekend in front of a sold-out
Read More

Tiger/Will Ferrell May 29, 2007–Tiger Jam X played out over several venues in Las Vegas over the weekend, and several of music's biggest names rocked the private–and sometimes public–events. Hootie and the Blowfish kicked off the evening festivities at the Pre-Jam event that was held poolside at the Mandalay Bay. Guests were asked to wear all white, and according to one power couple that attended, the event was, "Awesome. The weather was perfect and Hootie was great, as usual. Kevin James did the introductions and mentioned some of the people who were in the crowd like Scott Hamilton, Jon Bon
Read More

May 21, 2007–We may all dislike the fact that Tiger Woods annually chooses to miss the Las Vegas PGA Tour stop, but his dislike to for the ease of the courses and the pro-am format doesn't mean he has a disdain for Las Vegas and its golf courses in general. He loves Las Vegas so much that he annually hosts his major fundraiser, the Tiger Jam, at the Mandalay Bay and this year there are several golf course events happening at the fabulous Las Vegas golf course Cascata, a Rees Jones-designed masterpiece in the hills above Boulder City. Bon Jovi
Read More

May 9, 2007–You never know who you will run into when playing golf in Las Vegas, and this past weekend of big events was no different. The stars were burning brightly at Las Vegas hotels and casinos, and a few of the names in town spent some time on the greens and fairways of Las Vegas golf courses. The Tiger Woods of motorcycle racing, James "Bubba" Stewart, secured the "Superbowl of Supercross" championship at Sam Boyd Stadium on Saturday night, but while he was preparing for the race many of his friends and buddies were teeing it up at Las Vegas golf course Bali Hai
Read More

March 26, 2007–Tiger Woods is on a hot roll. One that's lasted about a decade, and shows no signs of cooling. When Tiger finally dispatched Brett Wetterich over the weekend to win the CA Championship, a World Golf Championship event, it marked his 77th win as a professional. His first PGA Tour win came at the 1996 Las Vegas Invitational, played at Las Vegas golf courses TPC Summerlin, Las Vegas National Golf Club and the old Desert Inn Golf Club (since remodeled to be WYNN Las Vegas). The 77 wins come in three categories listed in the official PGA Tour
Read More 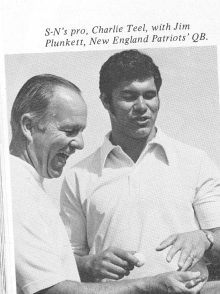 During every show for many years, historical talk show host Johnny Carson would punctuate his monologue with a pretty nice looking golf swing. It became a signature move, and one that every Carson impressionist put in their act. So who was Johnny's pro that helped make the swing "fundamentally" sound? According to Terry Webber, the nephew of legendary PGA of America Las Vegas Golf Pro Charlie Teel, that swing could be credited to his Uncle and Las Vegas. "I remember watching the Johnny Carson show, and whenever I would see the 'golf swing', I would think of Charlie," Webber said.
Read More

NBA All-Star weekend burned brightly and the world was watching. And Las Vegas golf courses were right in the middle of the action. The All-Star Celebrity Golf Classic hosted by Athletes in Action was played at Dragonridge Country Club and had several celebs and sports stars teeing off at the Jay Moorish/Dave Druzisky private course tucked in the hills above the Las Vegas valley. Football players Aaron Glenn and Jonathan Ogden, actor Kevin Sorbo, comedian Dennis Miller and former NBA star Spencer Haywood were just a few of the notables.
Read More

The NBA All-Star Game weekend is the biggest thing to ever hit Las Vegas, and several Las Vegas golf courses are right in the middle of the action. On Thursday, NBA All-Star media gathered at Bali Hai Golf Club for an event. George Gervin was among the participants. And this weekend is highlighted by an ESPN event at WYNN Las Vegas where Josh Duhamel, star of the NBC series Las Vegas, is scheduled to play.
Read More

Mirage headliner and namesake for the Danny Gans Junior Golf Academy is taking his golf game and voices on the road to Pebble Beach. Danny Gans will tee it up for the first time in the AT&T Pebble Beach National Pro-Am. The event is the PGA Tour's annual "golfapalooza", and what the celebrities, who are paired with PGA Tour players for the week, do is many times more memorable than the actual competitive golf.
Read More

Video footage from a new television commericial is leaking out, and shows Tiger Woods spontaneously tackling an actor with an "Urlacher-esque" hit. Local physical therapist Keith Kleven has long said that Woods is one of the most athletic people he has ever seen. Tiger shows good form in the video. View the video here.
Read More

The list of celebrities who play golf in Las Vegas is long. Presidents, movie stars, athletes and other notables tee it up here on a daily basis. The late Sammy Davis, Jr., and his Rat Pack buddies, were some of the first to make golfing in Vegas the cool thing to do.
Read More

By Brian Hurlburt, Golf Las Vegas Now editor Celebrities, sports stars and other dignitaries have a long history of playing golf in Las Vegas. Several presidents played at the old Desert Inn, and Sammy Davis, Jr. and his Rat Pack buddies were always teeing it up on the layout.
Read More