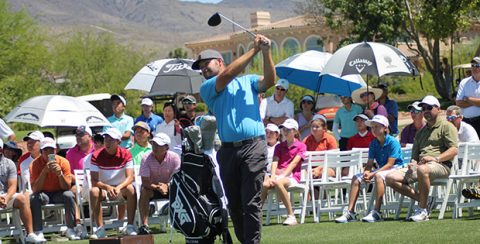 Las Vegas, Nevada (June 12, 2015)–The Ryan Moore Junior Championship at Anthem, one of five American Junior Golf Association events held the week of June 8-11, 2015, drew a field of 78 (54 boys, 24 girls) of the nation’s top junior players to Anthem Country Club. And tournament host and event namesake, UNLV grad and Las Vegas PGA TOUR Pro Ryan Moore, was on hand on Monday to greet the players and put on a clinic. –By Bill Bowman

Then the players took center stage on the par-72 private course that can stretch out to 7,373 yards. On the course, the players, representing 13 states as well as Guam and Singapore, showed why they are some of the best up-and-coming players.

Yash Majmudar (rounds of 72-70-70—212), from Singapore, won the boys title in a playoff that included six golfers. All six came in with a three-day total of 212, four-under-par. Syouta Wakisaka (67-75-70—212) was the only Las Vegas player in the playoff. Five players birdied the first playoff hole, the par-5 18th, with one player going out with a par. The five then played the 18th again with Majmudar sinking a putt for an eagle for the victory.

On the girls’ side, Kaylee Benton, from Buckeye, Ariz., (who has signed a letter of intent to play at UNLV) took home the title with a 212 total for the three rounds, four-under-par, with rounds of 69-71-72. Second, two strokes back, was Michelle Xie from Palo Alto, Calif.

A total of 11 players came in with three-round totals under par for the tournament. Click here for the final results.

Moore, a 2005 graduate from UNLV, was four-time All-American and the 2005 college player of the year. He won just about everything possible as an amateur and had a 2004 season for the ages. He won the U.S. Amateur, U.S. Public Links, the NCAA Championship, the Western Amateur and the Sahalee Players Championship.

He’s won four times on the PGA Tour and has earned more than $20 million. He’s the back-to-back champion of the CIMB Classic and has a victory in three of the last four seasons.

AJGA graduates have more than 600 victories on the PGA and LPGA Tours including players such as Moore, Jordan Spieth, Phil Mickelson, Tiger Woods, Stacy Lewis and Paula Creamer.