Save All Year Long at Club at Sunrise 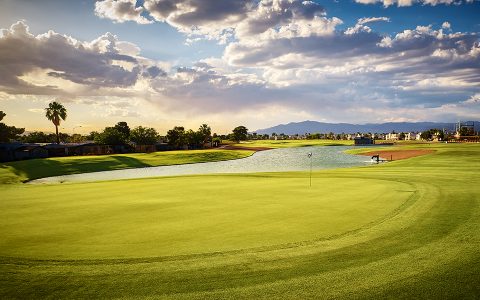 LAS VEGAS, Nev. (June 19, 2017)–Like the rest of the world’s population, golfers love deals. And if that deal is lower rates for every round played and lasts for a year, well, where do we sign up. The Club at Sunrise has just such a deal with the Tee It Up Membership. Players have the choice of paying in advance for one year ($280, which in essence gives players four months of free play) or they can pay $35 per month (a month-to-month). It’s your choice. — By Bill Bowman.

Each membership comes with unlimited range balls, one free twilight round, a monthly short-game clinic, 15% off golf shop merchandise as well as other offers throughout the year.

With the membership options, players pay just $24 for a round of golf (after 10 a.m. on weekdays and 11 a.m. on weekends). It’s that simple. If you and three friends are all members, your golf outing is under $100 for the four of you.

“We think it’s just a great deal,” said Matt Kalbak, general manager. “The course was closed for three years and it’s a whole new course now and we have some of the best turf conditions in the valley.”

There are plenty of other golf deals available. For example, from now through August, the $24 pricing for members is good any time of the day. And after 1 p.m., the price is just $10 for members. For non-members, the super-twilight rate is just $19 through August. There is also a special for seniors: tee off before 7 a.m. and pay just $19.

Kalbak said players need to check the website often for specials or join the email club to get the best pricing and alerts to specials.

The Club at Sunrise is a par-72 layout that stretches to 6,503 yards from the tips. It opened in 1964 and was originally designed by Dick Wilson and Joe Lee.

With the new name change and re-opening in 2016 after several bouts with severe flooding, also came millions of dollars in renovations. These have definitely left the course new and improved.

The Club at Sunrise, located just minutes from the bright lights of the Las Vegas Strip, is a straightforward golf course offering a fair–yet challenging–test for golfers of every ability.