Las Vegas, Nev. (Dec. 3, 2015)—It’s one of those phrases that’s been uttered thousands, if not millions, of times: Let’s go to Vegas. And with those words, Vic Wilk started a Vegas golf journey that has evolved into what he calls a picture-perfect life. That life has included more amateur titles than he can count, a professional victory on the Nike Tour (now the Web.com Tour) as well as his latest venture: an instructor at the Butch Harmon School of Golf where he lends a helping hand to professional players as well as those just getting started in the sport, and players in between. –By Bill Bowman

This article can also be viewed on LasVegasGolfInsider.com. The Butch Harmon School of Golf is a part of Caeasars Entertainment. Caesars owns and operates Rio Secco and Cascata.

Wilk is on the staff at the Butch Harmon School of Golf and is heading into his sixth year at the school. The school, located at the Rio Secco Golf Club in Henderson (a Vegas suburb), allows Wilk to work side-by-side with the world’s best instructor teaching everyone from pros to beginners. “Butch is the best,” Wilk says. “Butch says simply, ‘There’s a lot of ways to get the job done. The Hall of Fame is full of different swings.’”

But before you can talk about the Vic Vegas story, it’s important to detail his stellar amateur career in Southern California and a time as an aspiring child actor prior to his time as a professional golfer. To say Wilk was hooked on golf early would be an understatement. He played in his first national tournament at age five and he hoisted more than 100 junior trophies while playing in Southern California, including three Junior World championships.

During those days there was more to Wilk than just golf. He was also an actor, coming into prominence with roles in Peter Pan peanut butter and Stri-Dex medicated pad commercials. He also had about 15-20 small roles on shows such as General Hospital and Days of Our Lives. He even played Howard Hughes as a little boy for a TV show, but that wound up on the cutting room floor. “Those gigs helped defray golf lesson and travel costs,” Wilk says. “My dad had a carpet cleaning business and we’d travel around the summer playing junior golf events. Looking back, it was a pretty special time.”

His acting career ended early, but his pursuit of golf stayed consistent. Following his junior golf glory days, he went on to win the NCAA Division II individual title in 1982 at California State University at Northridge. He was also a four-time All-American.

The Vegas/Wilk story flashes back to 1993. Wilk had earned a PGA TOUR card after going through the arduous Qualifying School. That made him a member of the TPC family. “There was nothing in California so I went to Arizona to play at the TPC course,” Wilk remembers. “But it was quite busy and was always tough to get out for a round. Eventually one of my buddies said ‘Let’s go to Vegas’ and I said, ‘yeah, sure. Let’s do it.”

He had ties in Vegas including Eric Dutt who is now the vice president of golf operations for Caesars Entertainment (Rio Secco and Cascata). “I’ve known Eric since I was 8-years-old,” Wilk says. “And then there was Ralph Mead, who retired as a detective at the LAPD. He was the head guy for fraud at American Express in Las Vegas. Outside of Butch (Harmon), Ralph’s one of the best story tellers ever.”

Shortly after he made the move to Vegas, he won a tournament on the Nike Tour. “That pretty much locked me in for about 10 years,” he says. He also played practice rounds with Vegas residents Robert Gamez, a PGA TOUR champion, and Brady Exber, now a world-class amateur. The stiff competition helped Wilk improve as a player.

But while he was trying to make a name for himself as a player, there were always other thoughts in the back of his mind. “I became really interested in the golf swing pretty early, maybe at 17 or 18,” he says. “Being left-handed, I kept getting a lot of different ideas about the swing. I just wanted to find out what was really going on with the swing.”

Wilk has spent time with the likes of Greg McHatton, Ben Doyle, Hank Johnson and even Mac O’Grady. He found out there was a lot to learn about the golf swing in addition to forming his own thoughts about the Greatest Game. “There was just a lot to absorb,” he says. “And it was interesting stuff. I was even tracking what the body does with a HealthSouth group by collecting information through early body suits.”

Even while still playing himself, he started working with Nike players. “A few guys would just show up and ask ‘What about this’ or ‘What about that,’” he says. “Guys just started showing up and asking for help.” He earned a solid rep as both a player and instructor.

Wilk basically retired from professional competitive golf in 2003 after 21 years and visits to 18 countries to play. He focused solely on becoming an instructor and a few years ago found his home at the Harmon School working with Harmon and the other staff professionals.

Wilk learned well from his early lessons and now, along with the rest of the staff at the Harmon school, helps to unlock the potential of everyone who stops in for lessons. “It’s all worth it,” he says. “It’s just fun helping the average guy and it’s quite rewarding when a guy breaks 80 for the first time or a junior wins his or her first tournament. The goal is to hit the ball where they are looking and to understand how to accomplish that. We have drills to help. The bottom line is to get the ball in the hole in fewer strokes.”

Wilk works with top pros and amateurs. Exber, his former competitor during his early Vegas days, is one of his best success stories. Exber is in the Las Vegas Golf Hall of Fame and also won the 2014 British Senior Amateur. He has also won several other national amateur titles and has been the Southern Nevada Golf Association Player of the Year too many times to remember.

For a brief time a few years ago, Vic’s own competitive fire returned and a vision of life on the Champions Tour briefly came into the picture. But then he stepped back and thought about the things that were most important to his life. “I just realized how much it takes to try and compete,” he says. “And I’ve got a 10-year-old daughter (Sophia) and a beautiful wife (Miche) who I’m spending a lot of time with and it’s a blast.” He then added, with a chuckle: “I’m hoping it’s at least another four or five years before (Sophia) doesn’t care about hanging out with me anymore.”

For now, the lessons and the home life are all Wilk needs in his life. “I’ve got it pretty good,” he says. “It’s tough sometimes teaching six days a week and sometimes 10 or 11 hours a day, but I wouldn’t trade my life now for anything. I’ve certainly been blessed.” 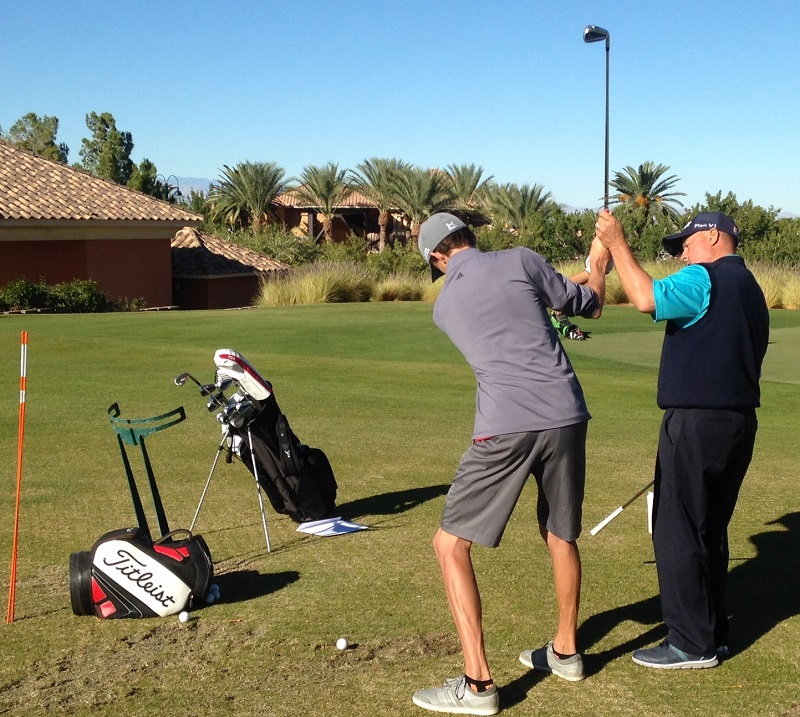