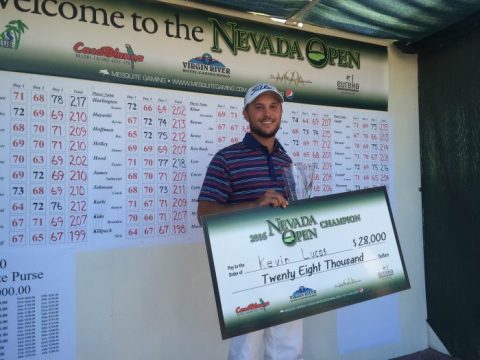 Just a few days prior to finishing 19-under par and winning the Nevada Open at CasaBlanca Golf Club in Mesquite, Nevada, Kevin Lucas was about 30 minutes away from earning official status on the Web.com Tour. Late during his final round of the second stage of PGA Tour school, Lucas was within the score needed to become exempt for the 2017 Web.com Tour season, which would put him that much much closer to securing a spot on the PGA Tour. –Brian Hurlburt

A faulty finish of bogey, triple bogey at Oak Valley Golf Club in Beamont, California, cost Lucas dearly and he was left looking in from the outside and without any official status for next season. After speaking with friends and family, Lucas gathered himself and made the trip to Mesquite to play in the annual professional state championship for the second time. It was worth the effort.

“Last week at second stage of Q-school qualifying I was inside the number to earn a card all week and obviously when you get to final stage, you get Web.com status,” Lucas said. “But I had a bad finish on my last two holes. It was one of the toughest things I had to deal with and to come back and get a win here is the ultimate redemption. I still don’t have status still but it’s a nice check and it feels good to play well and that’s the most important thing. I had a lot of support from my friends and loved ones and they helped me get in the proper mindset to play this week. I probably played a little pissed off this week but it worked and I played with an urgency to do something positive.”

Lucas, from Folsom, California, fired rounds of 64-65-68–197 to win the Nevada Open and collect the first place check of $28,000. It was the largest payout of Lucas’s professional career. Lucas played two years at the University of Nevada, where he won a tournament as a senior prior to turning professional.

Nick Killpack, from St. George, Utah, shot 18-under par and finished second while former PGA Tour player Jeff Gove, of La Quinta, California, finished third at 17-under par. Former Nevada Open champion Seann Harlington, of North Vancouver, BC, shot 64, the lowest score of the final round, and finished tied for fifth at 14-under par. Cory Chavez of La Mirada, California, was the low amateur.

Lucas played well overall and said the Nevada Open win was arguably the finest of his career.

“I had 22 birdies and an eagle during the week and I just hit it very good and I made the putts that I needed to make,” Lucas said. “During the final round I missed a lot of putts but that just shows how well I was hitting it to finish 19-under par. I felt like I just struck the ball beautifully all week.

“With a field of 216 players, winning here is right up there with my best ever. It’s a good field and obviously a huge field so I am humbled to come out on top. Golf is so competitive now and it’s very competitive all the way down to the mini-tours. I shot 19-under par and I won by one shot. That shows you how deep golf is right now.”

“The progress that the Nevada Open has made over the years is amazing,” said Nevada Open tournament director Christian Adderson said. “We were sold out and had 40 players on the waiting list so I think that is a testament to how the tournament is run and the great prize money that is available. We believe we offer a first-class tournament and the players really enjoy everything about it and we appreciate all of them coming to play.”

Visit www.NVOPen.com for all tournament scores.