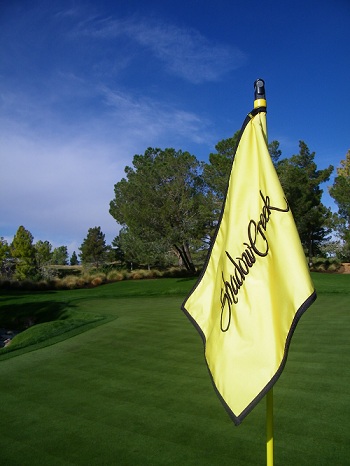 Las Vegas, Nevada (March 29, 2012)–Here he comes again. Michael Jordan, arguably the greatest NBA player in history, is back in Las Vegas this week and he has brought several of his golfing friends. The Michael Jordan Celebrity Invitational is to be played today through Sunday at the prestigious Shadow Creek. Among the notables scheduled to play are Wayne Gretzky, Ken Griffey, Jr., Greg Maddux, Brandi Chastain, and many more. The event is open to the public. –By Brian Hurlburt. Follow @LVGolfInsider.

“Last year’s debut event in Las Vegas was a fun-filled, exciting weekend for not only me, but also for our guests, partners and fans," Jordan was quoted as saying. "Service was second to none and I, of course, can’t pass up playing golf at Shadow Creek. I’m looking forward to another successful invitational and am hopeful we raise even more money this time around.” This is the second year the event has been played in Las Vegas and in 2011 more than $6 million was raised for charity.

Jordan is a noted high-stakes golfer who has a permanent locker at Shadow Creek, one of several big names with a locker. “We are incredibly proud to welcome the return of Michael and his tournament," stated ARIA COO Bill McBeath. "We loved opening Shadow Creek to the public for the first time last year for this spectacular tournament. We are honored to be a part of an event that raises money for important charitable organizations.”

ARIA at CityCenter is the host resort and the site for the Friday night gala concert that will feature Las Vegas' own Ne-Yo along with comedian Cedric the Entertainer. The gala is a private affair for sponsors and celebrities, but the golf event is open to the public. Click now for ticket information.

The tournament has created a special "Bring the Kids for Free" general admission ticket offer, which provides access to Shadow Creek for youth 16 years of age and younger when accompanied by a general admission ticketed adult (up to two children per paid adult). Also, professional autograph seekers will be prohibited this year, allowing easier access for kids.